What a relief to know I have some small amount of enthusiasm left for politics. I do not respect people who say they are apolitical and do not pay attention to that messy frightening and frequently disappointing world. It affects us way too much to ignore!

However, I also must admit that following politics anywhere in the world is a pretty sad pastime these days. The quote from German Chancellor Bismarck “Laws are like sausages, it is better not to see them being made” pretty much describes the revulsion I feel toward much of the political scene. But to ignore it won’t make it go away…

Anyway, to find myself actually excited over Hillary’s announcement was exciting in itself. I was a Hillary supporter in 2008 but at the same time Barack Obama was a pretty appealing candidate on several levels. I didn’t really do anything though and now I will? Probably. The only way to feel like a participant in the process is to participate!

Maybe One More Time. My big political adventure was with George McGovern who is and probably will always be the smartest, most thoughtful and honest candidate to come along since …forever?  And Hillary, you’re no George McGovern.

However you are intelligent and generally liberal. You are tough-strong-powerful and a grandmother. You have been out there and know there’s a world full of the good, bad and very ugly. You are a WOMAN. And, best of all, you just might WIN. Hell of a stable of qualities. Quite honestly I am so sick of men running things really really badly—why not try the other possibility?  Can’t be worse, might be better. Good enough odds for me.

I think I’ll ignore that fact the corporate world (pretty much all male) actually rules the real world–and for the next year and a half I’ll campaign a little for Hillary. Not too much, I’m not that excited, but some. Because I am more than just a little excited. But not too excited. More than 50% excited? Maybe 65% excited. 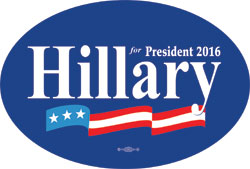 Posted on April 13, 2015, in Living LIFE and tagged George McGovern, Hillary, Hillary for President. Bookmark the permalink. Leave a comment.