Tom is one of my oldest (in friend years) friends and we share our mornings via blogs and comments. Tom in Delaware, me in New Mexico. I’m jealous of his rain and he’s jealous of my access to red and green chile I guess.

Today’s walk was the best. It’s been getting light a minute or two later every day—so out into the dark end of dawn. There has been more rain than usual (anything is more than usual—but more than that…) And there were actual smells today. Earth. Damp wood chips. Wet exotic animal dung from the Zoo. It was cool. Now there’s been enough rain so it’s greening up the landscape. What an invigorating and satisfying walk it was. 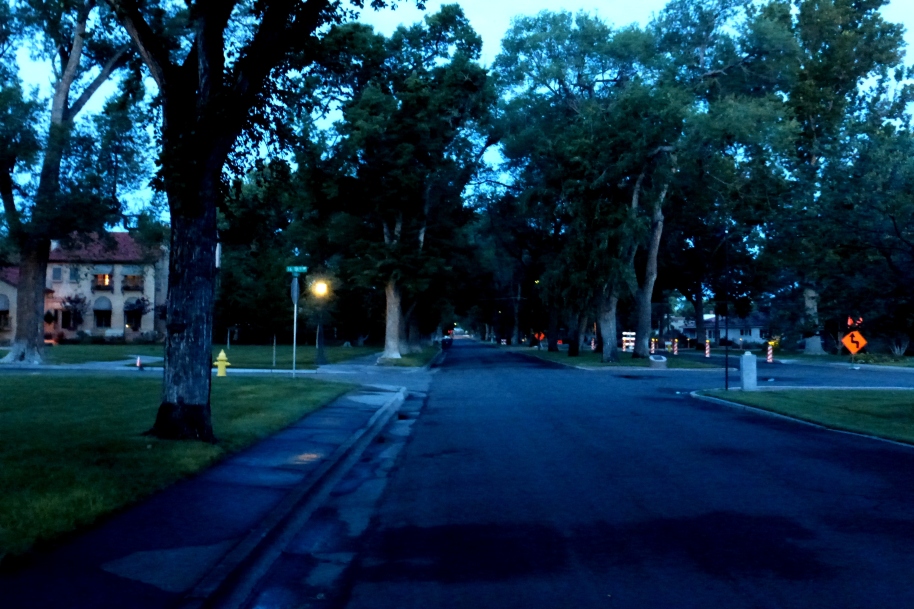 All dark and damp and silent. 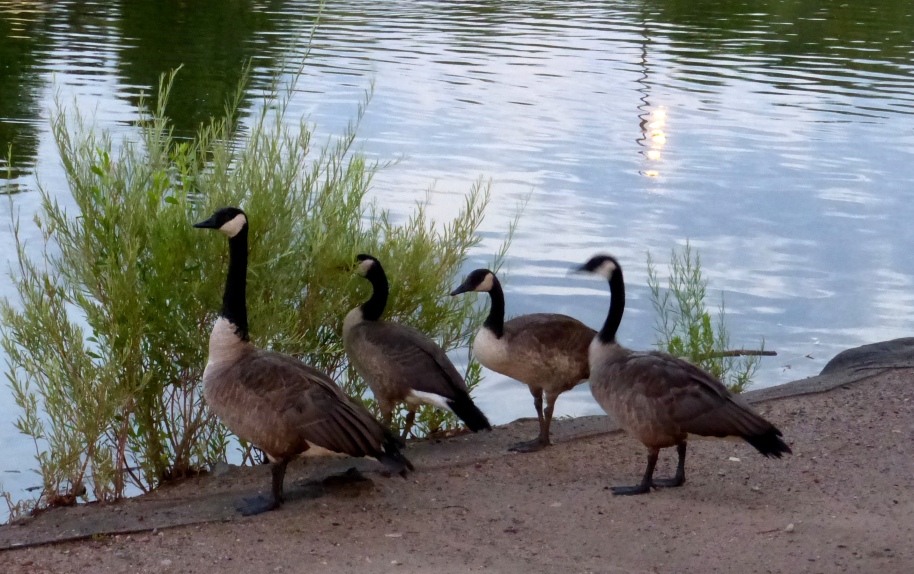 Shall we gather at the … pond. 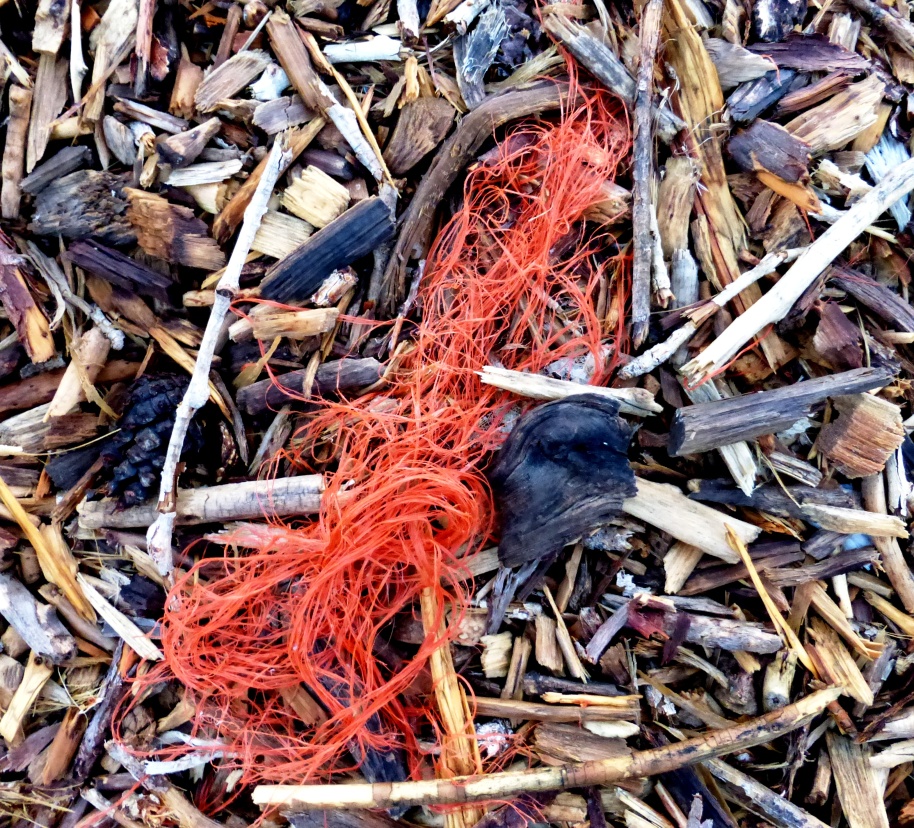 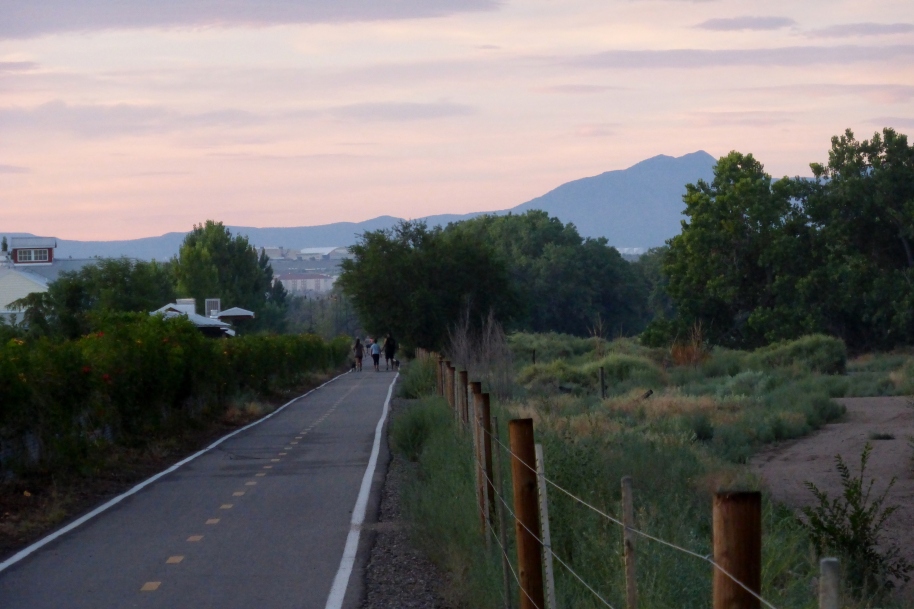 My path to back home and morning coffee. 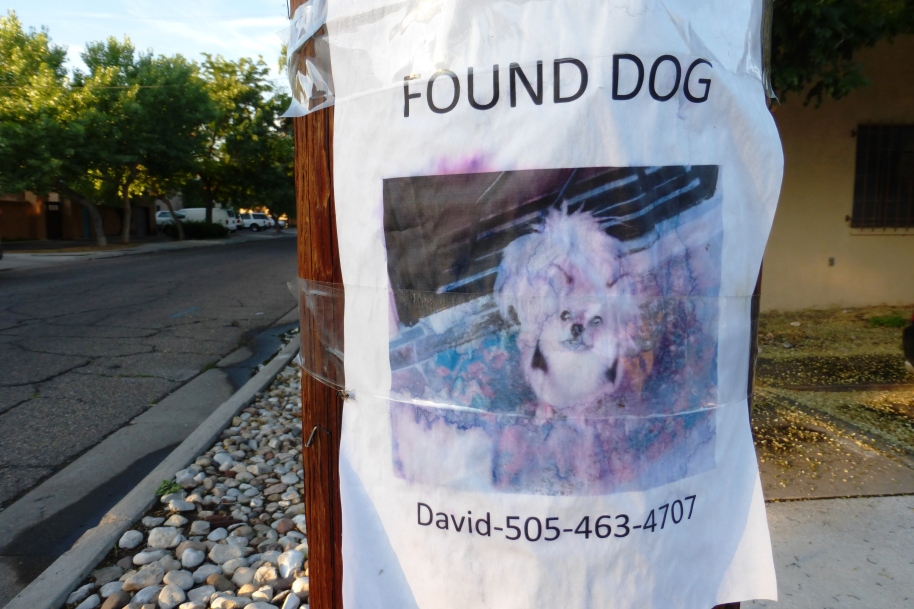 Sometimes the news is good.

Travel and the Gym

I love my gym. Really. Pres Healthplex. Catering to people in rehab, seniors and the entire medical and non-medical staff of Presbyterian Hospital. See, you can’t possibly feel out of place. Although I will admit the 25-year-old beautiful blonde with the gorgeous tan body on the mat next to me at Abs class this afternoon was a little intimidating.

The part about travel is this. I’m imagining squat toilets in the wilds of the Okavango Delta and I’m imagining the many flights which require flinging bags into the overhead. Now granted I will have a grandson with me for the entire trip but I don’t want to feel old and pathetic and wait for him to help me.

So I asked our favorite abs instructor what I need to do to prepare for the aforementioned circumstances. The result—I now have a plan which will require extra time at the gym for the next few weeks. But in the end I’ll be able to squat and fling like a youngster or at least a young oldster.I must have just the right photo to go with this post. Nothing of me squatting or flinging at least. Maybe Botswana.

I did. You see I was in Botswana for two days a few years ago. I took a bus from Joburg and made a bad hotel choice so I wound up in a semi-luxurious casino which I hated but didn’t have the energy to change. I have a post about it somewhere. More bad choices, the only day I was there was Sunday and everything closes. But I walked around the very friendly and mostly unprotected President’s and Government Offices and saw a plant that was new to me. Also read an entire book. This time Botswana will be wild animals and adventure. I think. 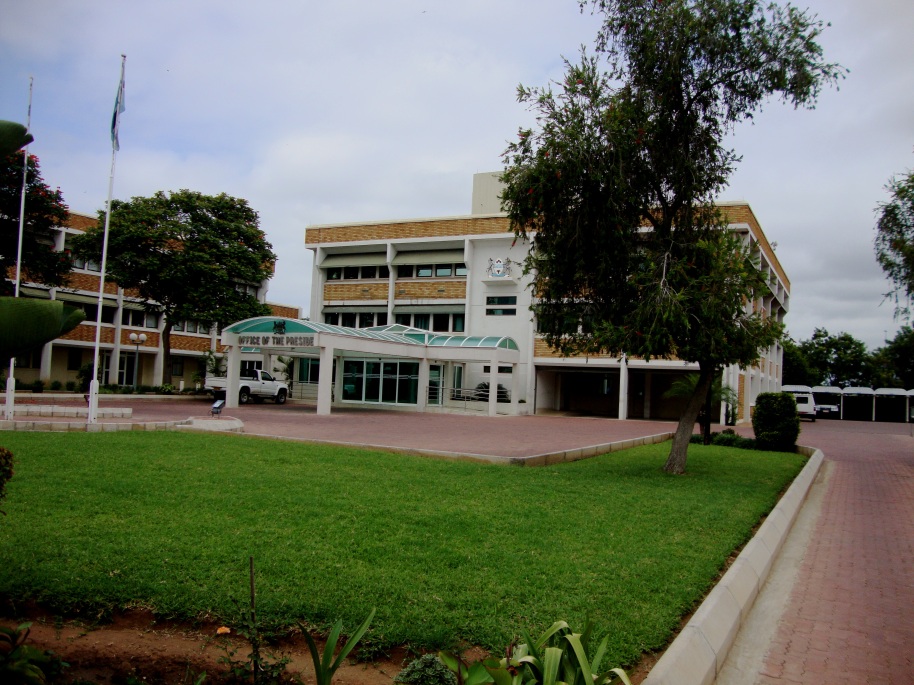 It’s risky to take a Sunday afternoon nap…might be just the moment or seven it rains. 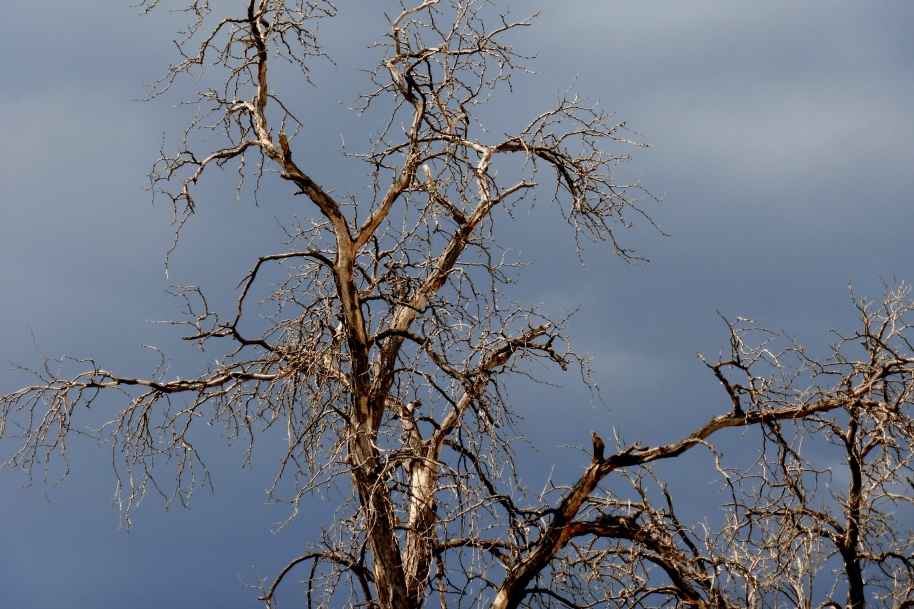 On its way out. Even dead trees are beautiful against a rain-logged sky. 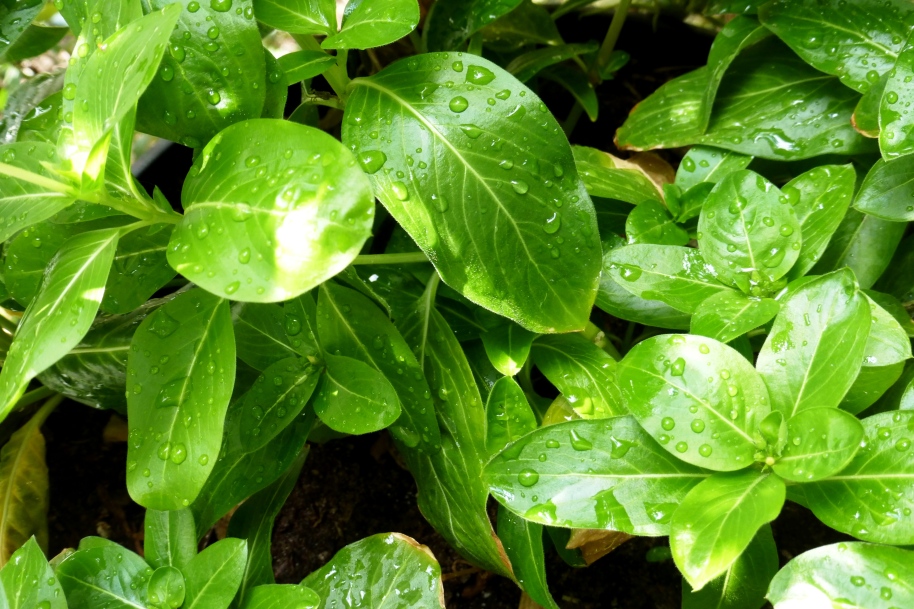 Had my plant on the porch, like taking your dog for a walk. She/he/it had never felt rain before.

Some of my favorite books are travel stories that cross regions, countries or territories of any size, meandering along by various transportation modes, noticing the landscape and people and noting the social, political and economic history when it seems pertinent. The author I’m thinking of right now is Ian Frazier and his books, Travels in Siberia and Great Plains.

For August I will be the Ian Frazier of a particular stretch of Albuquerque walkways. I’m talking about the routes I take three times a week, starting from my house at dawn, wending my way to the Rio Grande and then back an hour or so later. To be a great travel writer one must build their descriptive skills, mile by mile or, in my case, block by block. 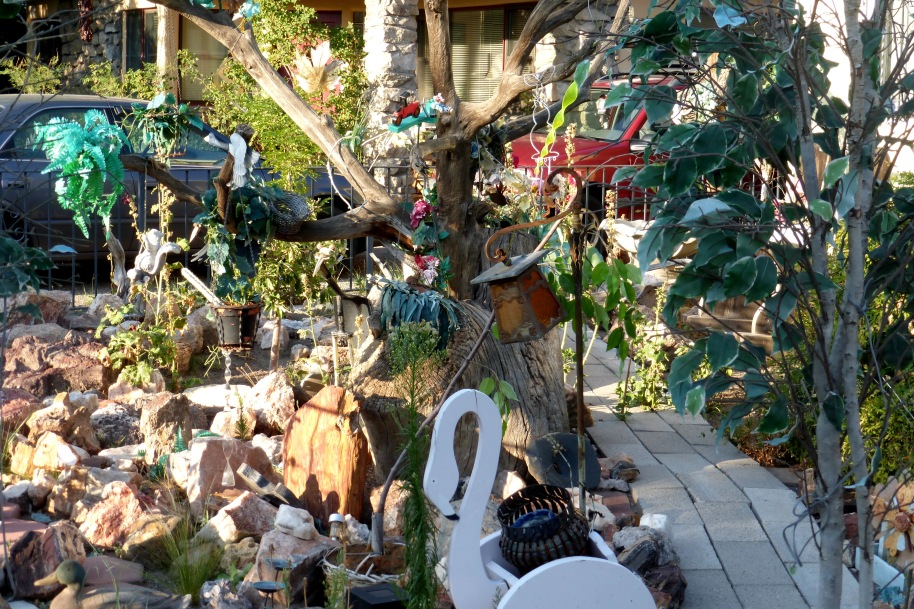 Best yard on the block.

TB #1 Eclectic: I have lived on this block for almost 14 years so I’m admittedly biased but it is surely one of the more interesting locations in the city. Just west of downtown, off Central Avenue, on the edge of Downtown Neighborhood Association (DNA) territory, there is this little street of modest homes (one converted to three rental units—extremely homey, attractive and well-cared for by the landlord who lives next door) and a couple of bonus attractions. 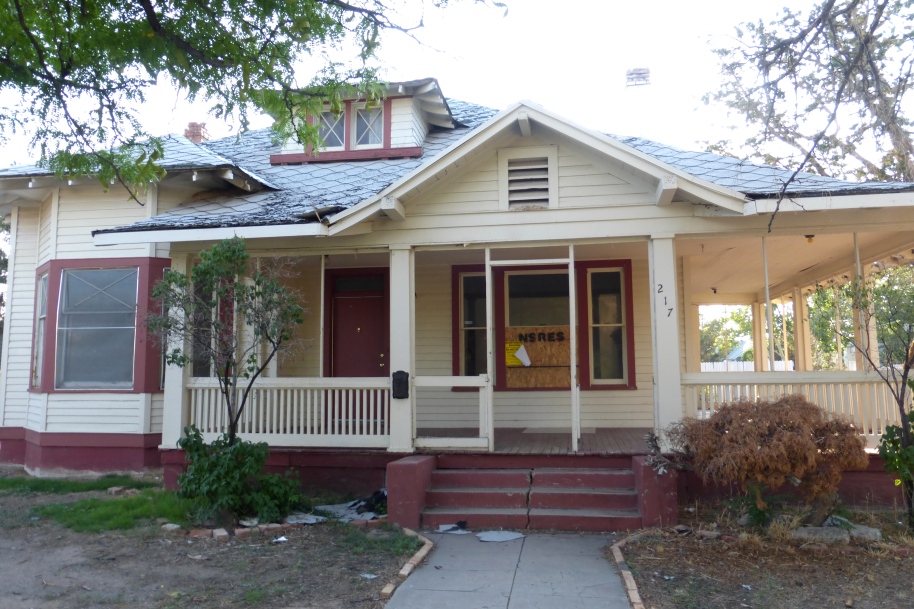 On the northwest corner of my pleasant street is the “storied” neighborhood eyesore—a virtually abandoned house, slowly fading, chipping, sagging. Its fifteen minutes of fame was as the location for an episode of Breaking Bad where some generic meth addict’s head is crushed by a falling ATM. Filming was quite a production. First of all they shabbied up the house even further by hanging old sheets in the windows, and junking up the front porch with a few wretched pieces of furniture. Giant trailers parked up and down the street, giant lights focused on the house, giant techie types ambled about and it’s safe to assume at some point a star or two showed up. It is unlikely most people on the block had ever seen the show so they expressed their disinterest by being all tucked in by nine or ten when the night shoot really got going. And all had vanished by morning except, unfortunately, the house, which stands forlorn only visited occasionally by—what do you call Breaking Bad super fans—Breakies? They come solo or in scraggly pairs, sometimes leaving sad little bunches of flowers on the front porch in honor of the crushed dude. 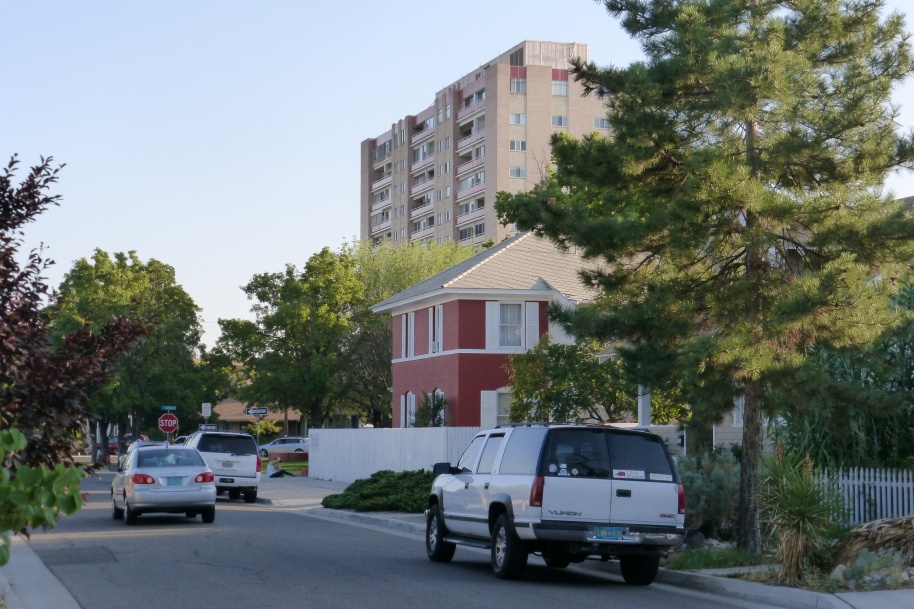 Other end of the block, a two-story house has been freshly painted for a family of lawyers. Every downtown neighborhood needs a few. 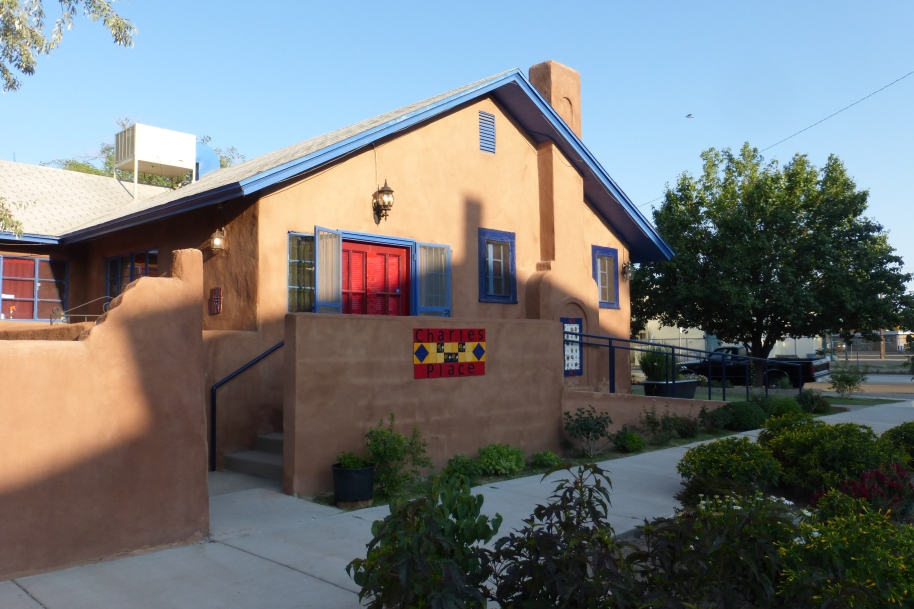 Right smack next door to me. I’m thrilled.

And across the street, the newest restaurant—that doesn’t want to be called a restaurant—in town. Bright-brown adobe home with glossy tile inserts and flowers in abundance converted to a place where the few can elegantly dine on Friday and Saturday nights. Charles Place is owner Charles’ retirement dream. The home’s original rooms have been magically transformed into mini-dining rooms, altogether seating about 20. The interior is scrumptious with the glowing colors of Mexico in tile, paint and artworks, all very handsome, friendly, and comfy. There is a set menu of the freshest of produce and meats that Charles has purchased for that weekend only. Tables are booked for the night so the talking and eating and sipping can last six hours should that be your desire. Dining at Charles Place is pricey by Albuquerque standards but given the unique ambiance and the potential for perfectly fresh, perfectly prepared food, it is likely well worth it. I’ll report back in a couple of weeks after my San Diego son, the connoisseur (he thinks!), and I try it out. 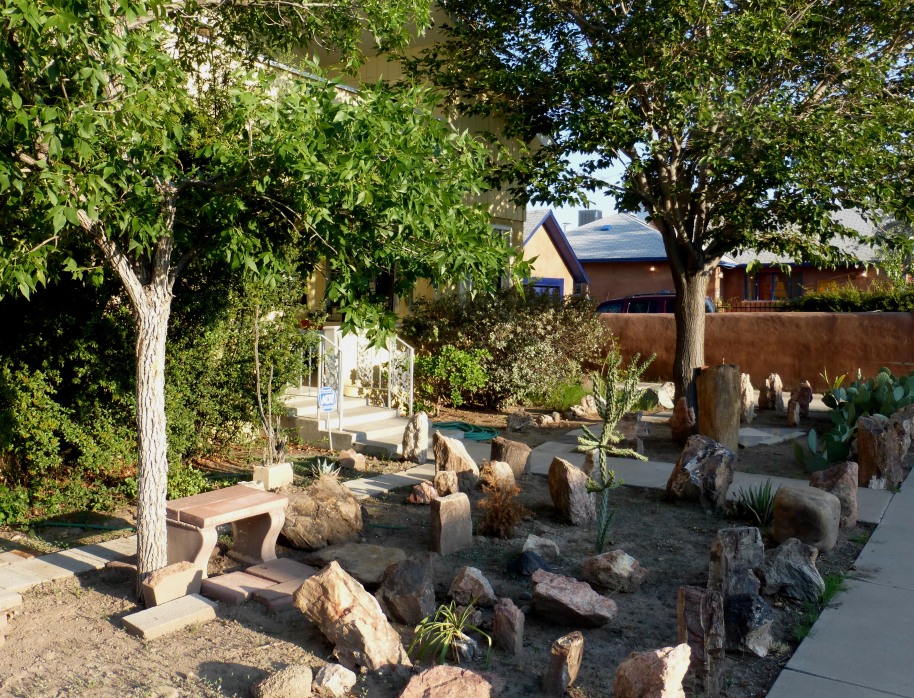 My yard, second best on the block.

Americans, contrary to all of the hype, are a fearful people, arming ourselves on our persons, in our cars, in our homes, in our places of work and recreation. To protect ourselves from…who is not us?

However, as people who tout Democracy at every opportunity, we can claim to be truly democratic, at least in this instance. Everyone, everyone, everyone has the right to a gun. No gun is too powerful, no person too volatile for them not to pair up in a perfectly legal and honorable way!

I have been mocking our cowardice and resulting gun-love for a long time. But now, finally, I too am fearful. If only buying a gun could solve my problem—the fear I feel for an armed world, a world of sociopaths uncontained, a world of glorified violence. If I sound like a very unhip person, unappreciative of the ‘art’ involved in stories of meth-making and death and destruction—not true. I love death and destruction within the pages of my latest crime novel…yeah yeah yeah, how quaint. But never mind all that. I’m scared. Finally I am really scared.

Of youngsters with no place in a normal world but who will be released out among us soon quite probably. Of cops without adequate screening and training who are as gun-happy and immature about it as all the rest of us. Of loutish, ill-educated, macho Ukrainian Russian dudes and their cousins all over the f**king world who never got beyond vroom vroom bang bang. 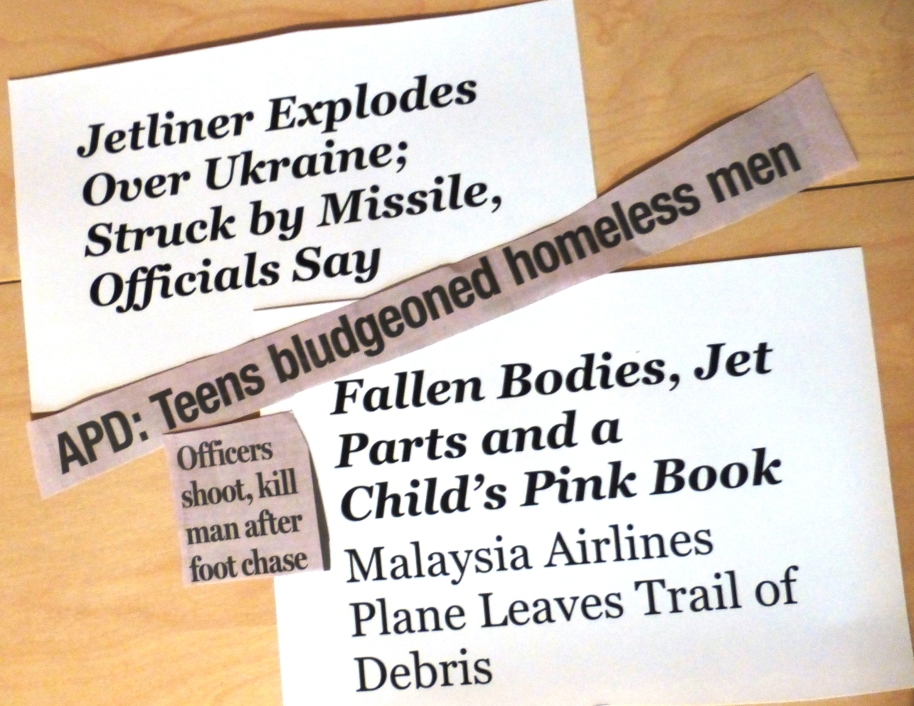 More Sculpture in the Morning 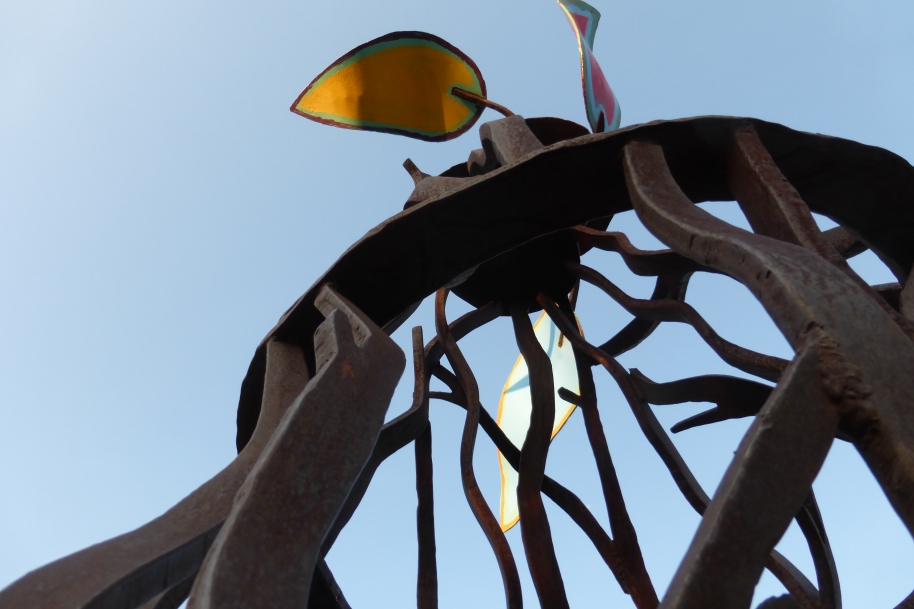 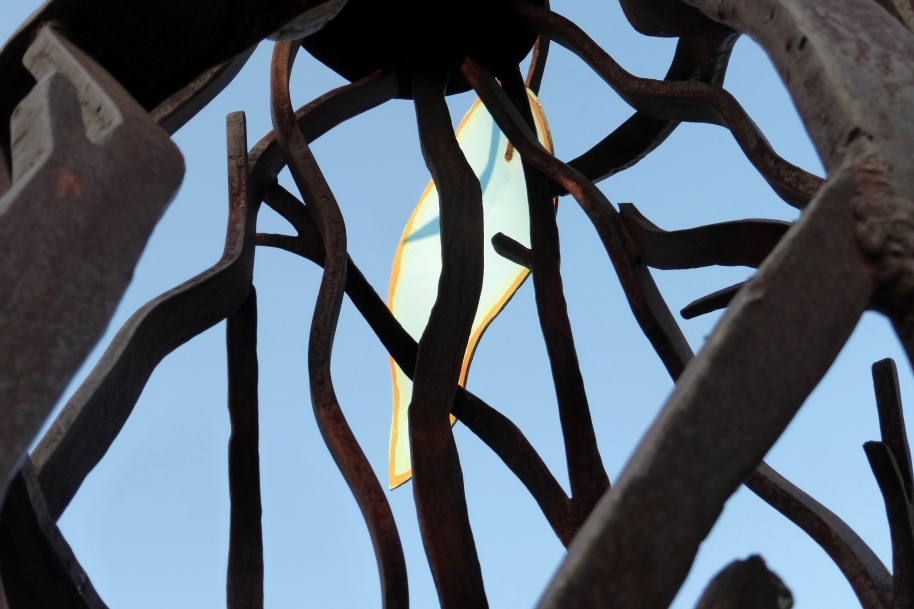 Some days art is more interesting than ducks. 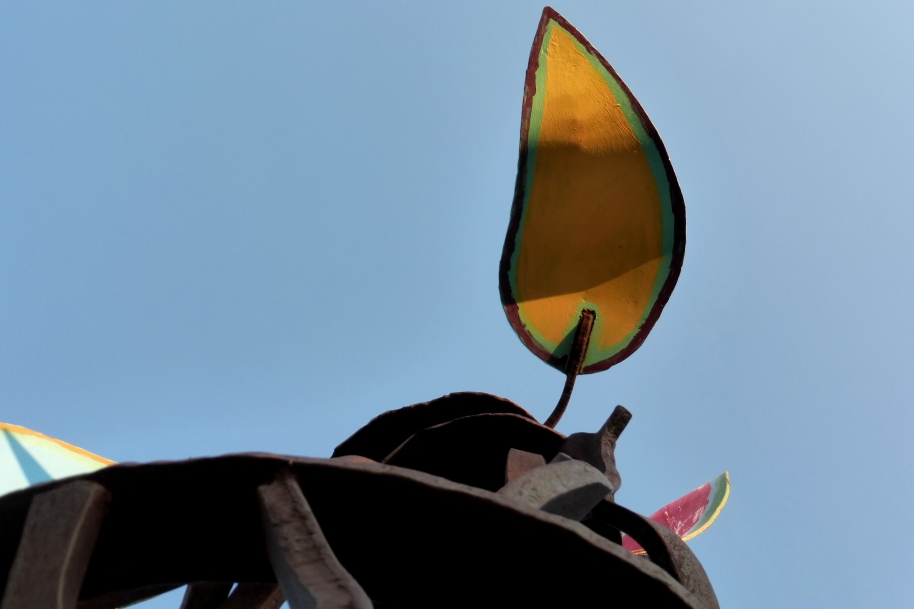 Doesn’t have a bad side. 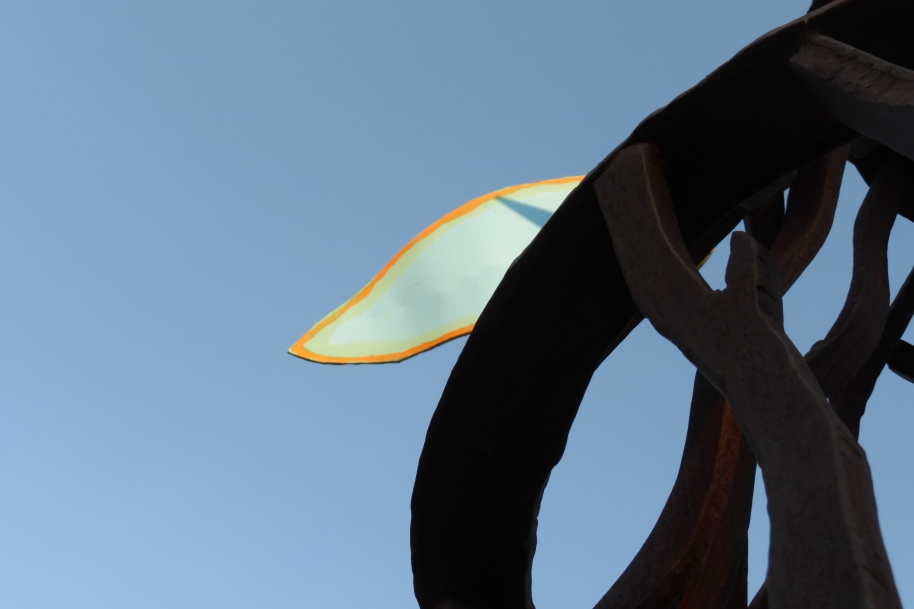 In the ever so light and bright Albuquerque sky. 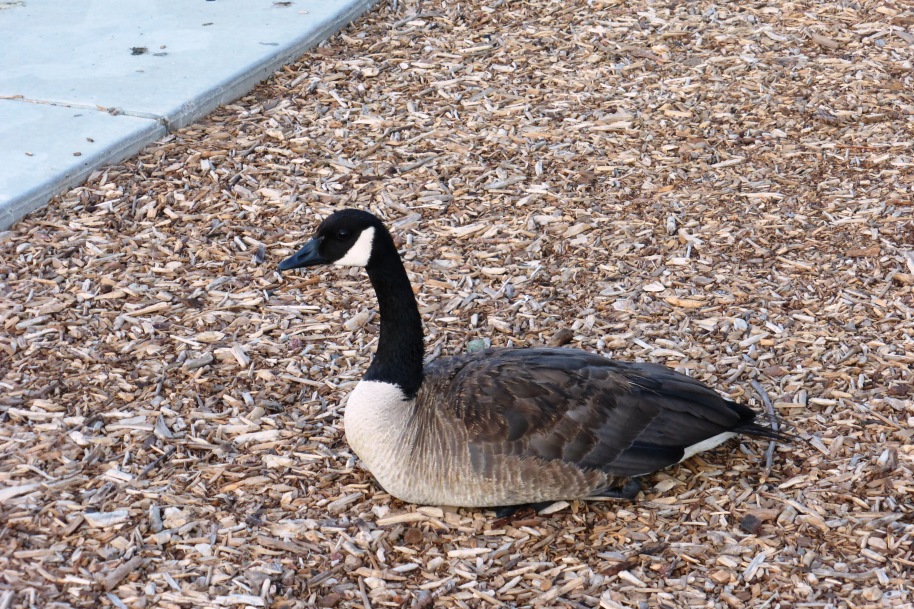 Art is at its very best however if accompanied by one duck.

The goal is to keep my three plants alive for some extended period of time. If that works I will get a cat. Then a dog. Then I’ll adopt a Moldovan orphan. Just kidding. No dogs or orphans but I am serious about the plants and the cat.

I only wanted one plant. It sits in the kitchen window and looks healthy on alternate weeks. Then my semi-thoughtful (I really wanted a whole box of Cinnabons just for me) son came with two more plants for mother’s day. What to do? I couldn’t just let them die—so now I worry and water and try to place them in sunlight they will enjoy. I say good morning to them and I may even buy a new pot for the pretty one.

I wish I just would have gone straight to the cat. So here they are. Because I don’t have any other pictures for today. 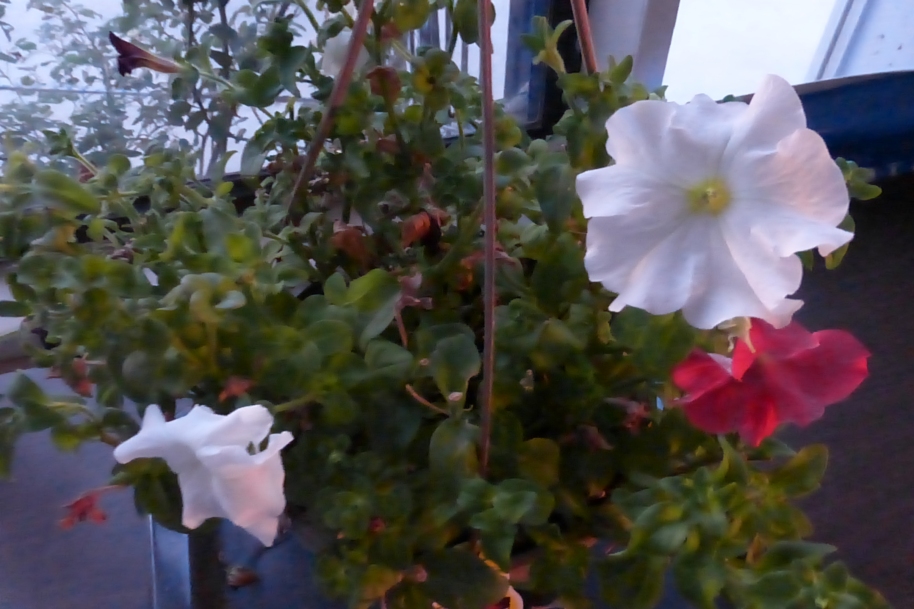 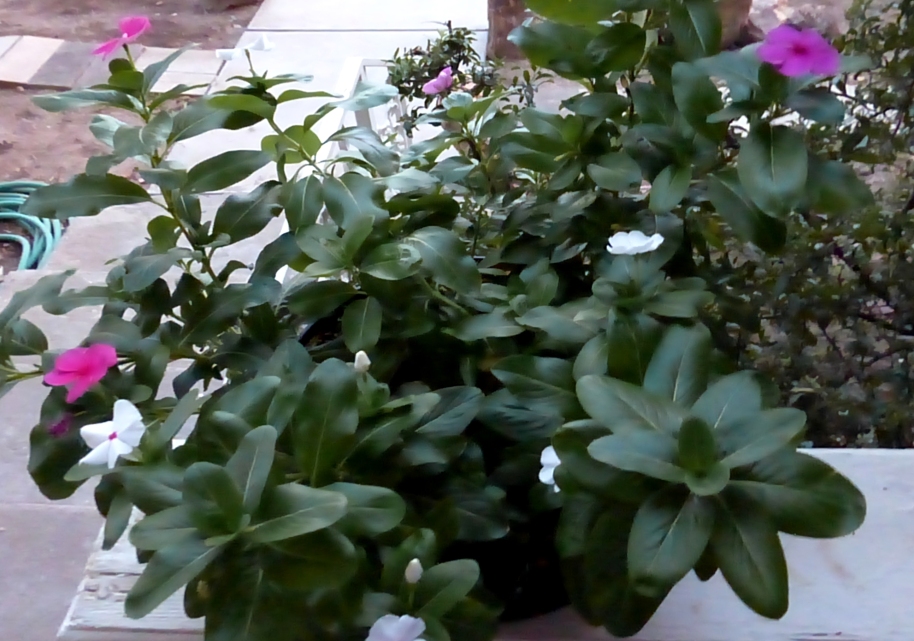 This is the pretty one. What is it?

A Monday Morning in July

Journal reports three Albuquerque teens have been killing homeless men. Thugs in Ukraine have shot down an airliner, the Israelis and the Palestinians are killing each other.

But down by the river it was good. Dawn. Good air to breathe, things to see, ducks to talk to… 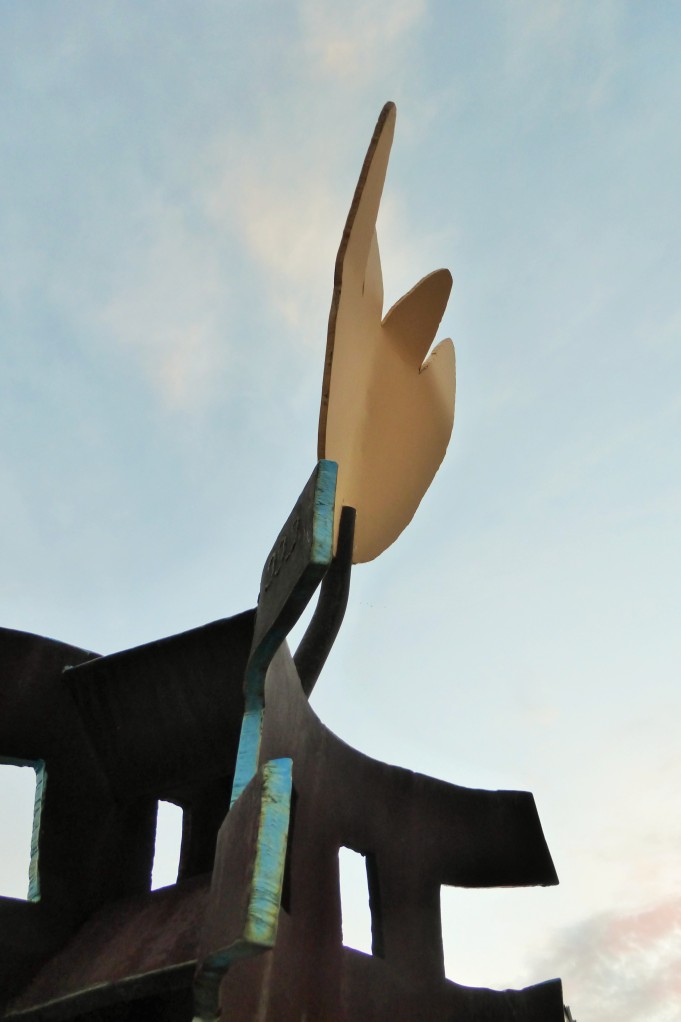 Art in the morning. Makes me think the day will be okay. 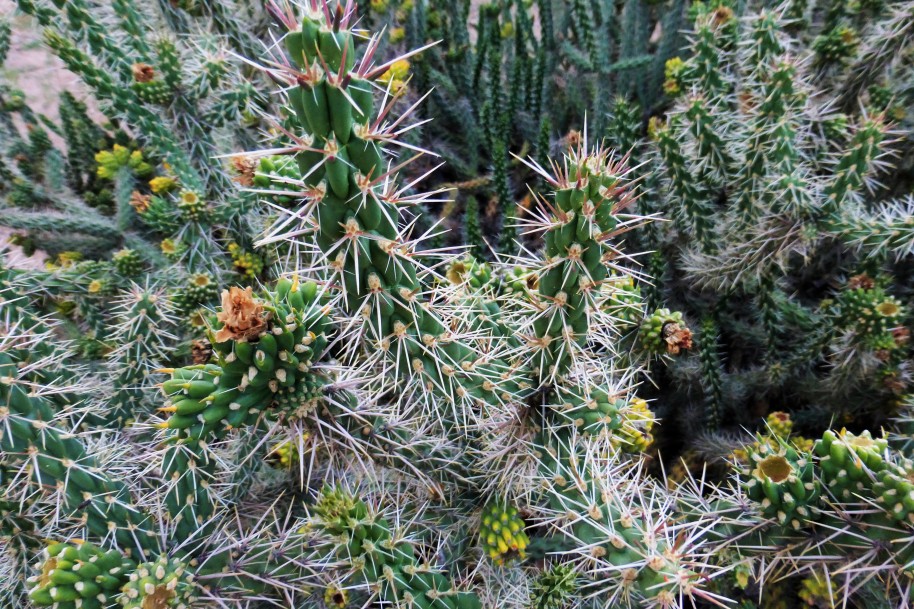 Tags: Albuquerque by the river

Sunday in Albuquerque: Writing, Cooking, PBS in the Evening 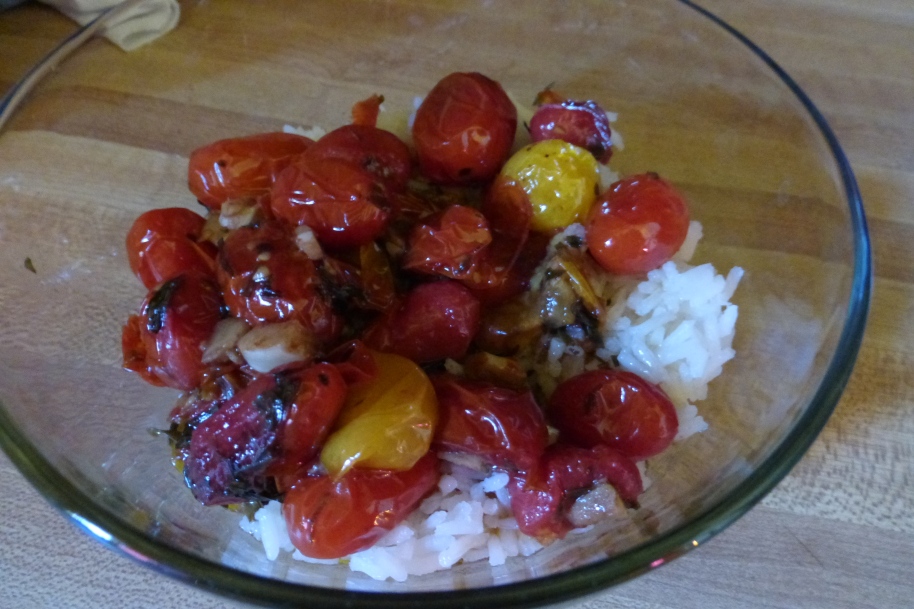 This week will be when I write two or three blog posts that aren’t all ducks or cherry tomatoes. But today’s not the day. I prepared cream spinach and garlic braised baby kale and my favorite—cherry tomatoes with olive oil and balsamic vinegar with pasta and rice. Made six perfect little work lunches, all frozen and ready for work.

Processed food is less and less appealing to me. And bread stuff. And even most kinds of cheese. I saw Alice Waters say all you really need in your kitchen for the basics of good cooking is garlic, olive oil, vinegar… then maybe some butter and salt? Then greens and a fish or chicken. I think I have that right. Did she say balsamic vinegar and did she forget to say cherry tomatoes?

I’ll write a whole food piece soon for the big class project—starting with all of the cakes I used to bake from the West Nidaros Ladies Aid Cook Book and ending with recipes from NOMA! The contrast should give me plenty of room for both comedy and drama. Strawberry Jello cake versus a recipe for Celeriac & Icelandic Moss, Seaweed & Egg Yolk.

Now “Last Tango in Halifax.” Love this messy show. PBS on Sunday night is the best. 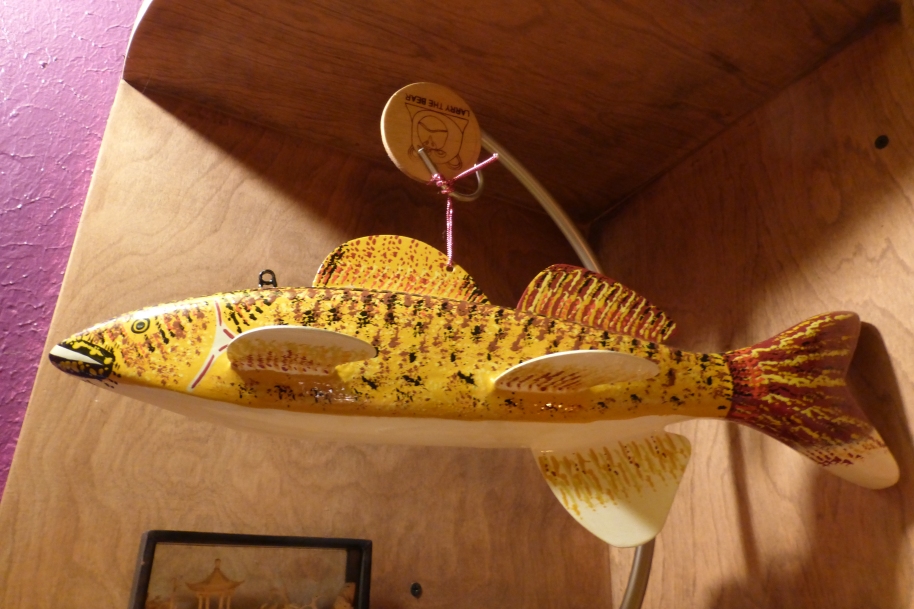 Nice morning. Slept until 6am. Wrote a little. Breakfast with Tasia at Cafe Lush downtown. Didn’t even know about the place. Nice service. Nice food. Worthy of a photo! Guess I should leave my work cave and my living cave more often. 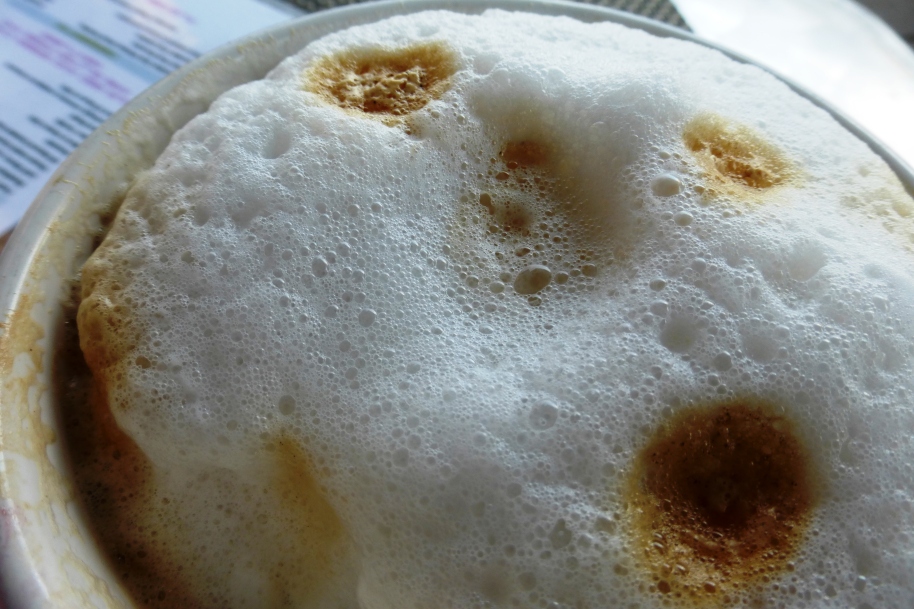 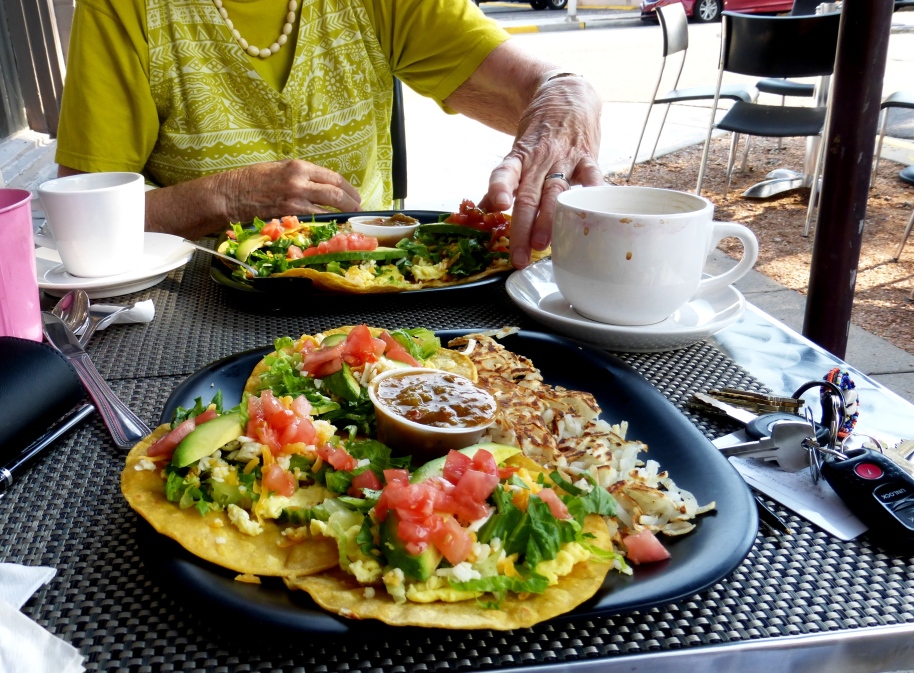