The only two things most people know about me is that I’m very proud of my Scandinavian heritage and I hate guns. Perhaps then, I am a biased judge of crime fiction of the European North where murder has to be carried out more imaginatively since they do not share our national passion for guns. Not that plenty of fictional Scandinavian crime doesn’t involve shooting—after all there’s only so much you can do with knives and poison!

Since last post’s overview of worldwide crime I’ve decided to proceed by region/country  for awhile, moving through Scandinavia, southern Africa and the UK before returning to explore other less literarily murderous locations.

Scandinavia is usually defined as Iceland, Norway, Sweden, Denmark and Finland—an outline which I will follow. However there are enough differences between them to note along the way plus the interesting situation of Greenland, a gigantic island closer to America than Europe, primarily inhabited by the Inuit people, and still governed by Denmark.

I do love being Scandinavian. Norwegian to be exact. When I look at my history wall crowded with photos of big solid serious immigrant ancestors on their South Dakota farms and in their Minnesota lumber camps I am proud. I wish I had more of a photographic history of “the old country” and their lives there. The good news is…I can and have traveled there…and seen and heard the people and met the relatives and eaten the food and understood that I was home in a very special way. The downside of my expanding knowledge of family history is that there appear to be no serious villains or even dashing ne’er-do-wells about whom I could fashion a mystery or two.

Since, off and on, this blog will take a murderous turn—right now in a Scandinavian direction, it seemed right to describe my travels in the north over the last few years as crime scenes—how if I were a crime fiction writer I could use these locations to set or solve the bloody deed. And how my favorite crime-solvers in each country have handled the place.

So now my inner mystery writer will take over for a few paragraphs—always on the lookout for just the right place to discover the body or the perpetrator.

Murder #1: Morticia in Reykjavik: In the mid-80s I first landed on Scandinavian soil. Iceland. My friend Sue and I were visiting England and France and Icelandic Air, with a 24 hour layover in Reykjavik, was the cheapest way to go. The overnight flight from NYC had been uncomfortably cramped which was only partially made up for by the best flaky white non-fishy fish I, a non-fish eater at the time, had ever eaten. It was my first trip to Europe and everything, from arriving at the big, busy and confusing NY airport to finding that the third person in our seating row appeared to be an evil countess from some exotic eastern European country of which we had never heard, was exiting. Our seatmate looked very much like Morticia Adams, was terribly haughty and made us feel…well, like ‘hicks abroad.’

Eventually we arrived, tired and eager, on foreign soil. Our hotel, near the airport, was Scandinavian modern and comfortable enough. We slept, then ventured out into the intriguing but somewhat foreboding world of Iceland on a dark, dreary and very chilly evening. Walking, walking, up a small hill to an anguished metal viking, back down a side street to the cozy restaurant discovered in “Europe on $25 dollars a Day.” (Honestly, I did not make that up!) By this time it was 10pm but daylight was still turned on. Inside however, maybe in deference to visitors’ body clocks, it was so very dark. Back in the day, in Dallas and Albuquerque, we NEVER ate after six and NEVER in small dark very expensive restaurants so we were in a state of tourist wonderland. 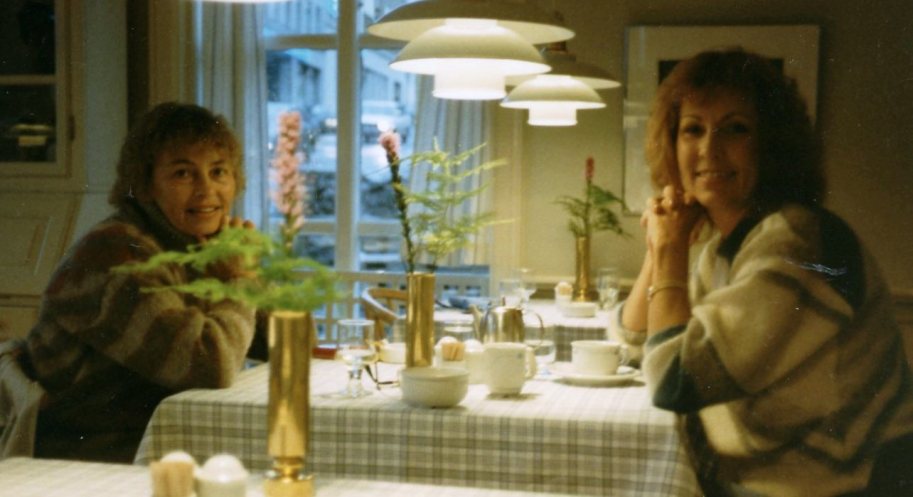 We ordered whatever the book said we should. I am sure it was well prepared but honestly the only thing I remember is the skyr (tart Icelandic yogurt) and the effect the wine had on our weary selves. We were seated in a corner and, even though the place was small, it was dark enough not to see who came and went very well. So, imagine my surprise when, slightly drunk by now, I visit the bathroom and upon, opening the stall door find our non-friend Morticia on the toilet seat, black tights down around her ankles, black sweatered torso slumped back against the tank, head flopped forward, black hair partially covering her face. What made me scream, even through my white wine fog was nearly impenetrable—was what looked like an antique wooden handle with silver inlays—sticking out through the mane of hair falling over her chest. There were no splatters or pools of gruesomeness yet—it had obviously just happened but the front of her already black outfit was further darkening and the gore seemed to be oozing, down through and under the wrinkled front of her pulled up skirt onto the toilet seat and into the toilet bowl. Blood red, the color of zinnias. The stall was so tiny she could not have fallen over without getting wedged between stool and wall but there she sat, relatively upright, thoroughly dead. I was back at the restroom door by then, gasping and uttering sounds more than actually saying anything—I think the waitress thought I was having a heart attack until I opened the door wider and pointed…then she screamed, a scream worth of victim-discovery in any language.

The rest of the night is a blur; it’s almost 30 years ago, wine, jet lag, etc.. Of course the police came and I was as helpful as possible, and we boarded our plane for London in the morning exhausted but, I must admit, feeling like true adventurers. And though later we tried calling the Icelandic embassy in the U.S. to find out who Morticia was and why she’d been murdered this was pre-internet…and without Google there is nothing to know. But I am sure, for the rest of my life, the image of Morticia murdered in a toilet will flash across my mind’s eye ever so swiftly when I enter any deserted bathroom and reach to pull open the stall door.

I can make up these little vignettes for everywhere I’ve been around the world, then if I can attract the attention of the right publisher they’ll contract me to revisit the sites of the imaginary murders and conduct further imaginary investigations from my imaginary Cold Case file and write imaginative stories about each and every one. They will pay me in imaginary money and therein lies the problem.

I’ve never tried to describe a murder scene before so maybe this is enough for one day. This kind of writing is probably not my cup of tea since I’ve never worked as a journalist, crime reporter, medical professional or been part of M16. I must have read hundreds of descriptions of crime scenes over the years though and watched enough NCIS and Law and Order to have absorbed a dictionary of details.

There you have it…Murder site #1 on the Scandinavian crime fiction tour. I cannot remember enough to make it very atmospheric. So moving right along to my next visit to Iceland in 2012 (and next body!) will enable me to fill that void.

But not today. Matthew finally had his second car crash at about 12:30 this morning and I’m too tired for more disaster.

Posted on May 5, 2013, in Living LIFE and tagged murder mysteries, Reykjavik, Scandinavia. Bookmark the permalink. Leave a comment.